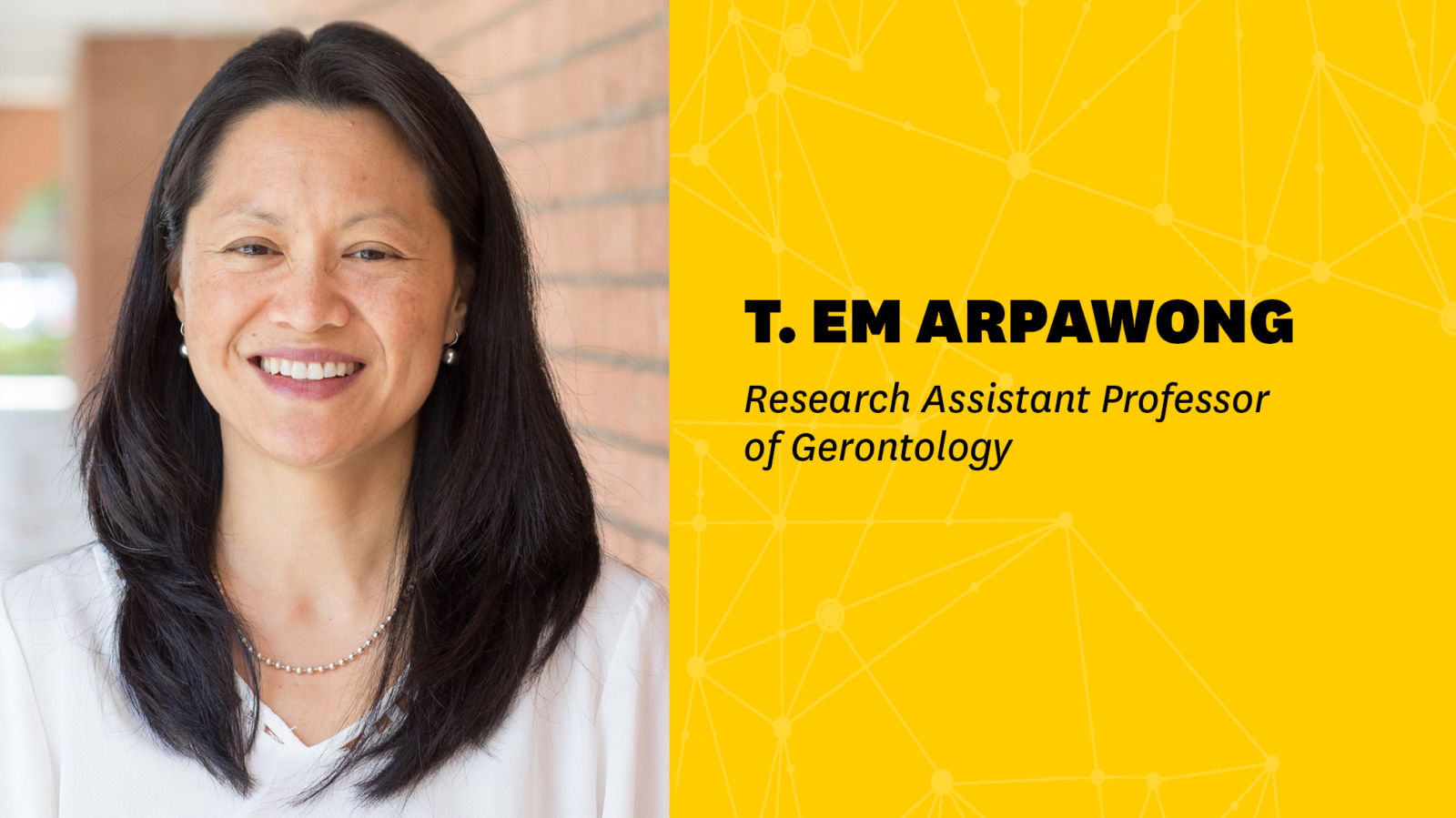 Research Assistant Professor Thalida Em Arpawong joins Professor George Shannon to discuss her research to better understand how our genes and environments influence how we respond to stress and adversity and impact how we age.

On the definition of bioinformatics and its use in research:

“Bioinformatics is a science subfield, but really just refers to a set of tools that we use to collect, analyze, and interpret findings from large volumes of biological data. We use tools like super computers, biostatistical models, computer programming, and specific types of software, while at the same time, integrating biological concepts to guide how we use these tools. So the data we use—we call it “omics” data, for short—includes primarily genomics, transcriptomics, epigenomics, proteomics, metabolomics, that is, all the omics. Here in the school of gerontology, Dean Cohen had a vision of creating a core to help support researchers in their labs that want to use omics data but may not have the background to do so.

So, relatedly, with the Genomic Translation Core, we also use bioinformatics to work with human data, to collaborate with biologists. So these biologists work on model organisms for their research, like worms, mice, or yeast, and the biologists who have been granted pilot awards through the Nathan Shock Center because they’ve made some important discoveries in their model organisms, we work with them to confirm what the relevance is of their findings for human aging processes. It’s an exciting time because through this work together, we have the potential to use the expertise across different disciplines to answer some bigger questions that we haven’t been able to previously with regard to cross-species effects of genomics and health.”

On her research on how experiences of stress and adversity throughout different developmental stages in life and genetic factors work together to influence emotional and cognitive health as we age:

“So we used to think that genetics was much more deterministic, but we now know there are much more complex and interrelated processes occurring. We found that social structures in which we can characterize groups, such as gender, race and ethnicity or social status, are very importantly related to how genes get expressed. Similarly, people’s behaviors shape levels of gene regulation and expression, then have downstream effects on immune system health, development of chronic diseases—for example, obesity, heart disease, depression—and even lifespan. So it’s becoming more critical to include these key social factors in human research when we evaluate the effects of genomic data on health.”

On her research looking at how having early childhood adversity and adulthood adversities affect the level of depressive symptoms when older:

“What we found were two main things. First, that there was essentially a dosage effect, so that with each additional childhood adversity, there was an even greater risk for more later-life depressive symptoms, even after the age of 50. And second, the hypothesis that was supported was called stress proliferation, which is essentially the idea that stress begets stress. So therefore, earlier-life adversities are accompanied by more adulthood adversities, and that’s how they work together to impact mental health later on.”

On the mind-body connection, or the role of mental health in healthy aging:

“When we think of psychological factors, such as stress and adversity and socioeconomic hardships, compared to other factors that affect aging, we’re finding that there are more influential compared to genetic or biological factors. And in a recent study by Eileen Crimmins, she found that, in particular with mortality and cognitive functioning, these factors explain 25 to 30% of the variance. So that’s a significant amount and often much more variance explained than we can detect for something like genetics.”

On epigenetics and how our social environment can affect our genetic expression:

“We used to work under the assumption that the effect of genes was best studied at the level of a genotype or just what’s encoded in our DNA sequences. But we’re finding that there’s so much more and we need to measure how our DNA has structural changes that occur throughout life that are not in the code itself but actually in our epigenome. So similar to using genetic risk scores, we can actually now calculate these epigenetic risk scores, and those tend to encapsulate things we’ve been exposed to or behaviors. … There is research on how we react to stressful experiences, how that it gets embedded into our epigenome. And we can quantify some of that using these epigenetic scores.”

On the role of education in health outcomes as we age:

“Education is important for aging because it’s one of the most consistent measures to relate to almost all of the health outcomes that we look at, including cognitive, emotional, physical outcomes, financial outcomes, and mortality. So it’s an important aspect, and what we found is that the heritability of educational attainment has been estimated to be around 40%, which then leaves 60% attributable to social influences, or the environment, but unpacking how those genetic factors and environmental factors sort of work together is important if we’re looking from the perspective of how to promote more education, especially for those at high risk for some of the negative health outcomes.”

On her research looking at psychological resilience in aging:

“I appreciate that the aging field is really the only one that embraces the resilience concept in a way that there isn’t a sole focus on disease or deficits, but an interest on healthier aging or successful aging from the perspective that there are different processes involved than when avoiding or preventing disease and morbidity.

A lot of my work has focused on psychological resilience in different developmental stages of life, which means evaluating what contributes to people doing better than expected in the face of adversity or challenge. So not just having greater wellbeing or greater health, but having those states despite having been exposed to having to adapt to life insults and significant stress. So what I’m focusing on now is evaluating lifelong effects from adolescents through older adulthood for psychological resilience and how that affects biological aging.”

On her research looking at the importance of physical activity across the lifespan:

“One of my projects uses the Project Talent Twin and Sibling study to answer the question of ‘Does it matter when somebody is more physically active in earlier life or later life, or do you need both to result in better cognitive and emotional health later on?’ and how much of the determination of those behaviors is nature versus nurture. For instance, how much is physical activity dictated by socioeconomic adversity when growing up or [by] later-life financial constraints? And then with regard to nature, one key finding is that there seems to be very little overlap between earlier and later life physical activities that’s due to genetic factors. So I didn’t expect to find this, but it’s interesting because from a public health perspective, I’m interested in how physical activity is a protective factor against adversity [and] results in better health and how the implications for findings from this work can inform how we design interventions to support how individuals adapt to stress throughout life.”

On the concepts of generativity and post-traumatic growth:

“There has been a lot of research on generativity and how that relates to a resilience concept called post-traumatic growth. So people who’ve been through really intense, kind of acute stressful experiences have to reflect and rethink what their life means, what their purpose is, what their direction is in life, how they orient to people and relationships. And one of the things that is very related to gaining more post-traumatic growth is, for older individuals, having this perception of greater generativity because I think there’s that relationship to purpose and meaning. And at the same time when you’re talking about looking forward, there’s that whole concept of future orientation that also is related to higher levels of post-traumatic growth and adaptation post-acute stress and adversity. So I think these are all very intertwined and interesting.”

On efforts to study the effects of mindfulness and meditation:

“There’s that whole field of psychoneuroimmunology that also bears some similar concepts [to transcendence] where there’s a lot of researchers who were looking at things like mindfulness, or flow. But the concept of mindfulness, I think, relates to transcendence and there is a whole group of researchers that formed these collaborations with the Dalai Lama, and they were trying to conceptualize how to operationalize these aspects of meditation and other things that we find are beneficial, but we can’t really study that clearly. And so there is a whole area that has emerged about the mind and the psyche and how we can use the mind and psyche to manipulate the effects on our immune systems and other aspects of our biology.”

“I’d really like to thank all the people who participate in surveys. Some who’ve taken part since high school, in the case of the Project Talent Studies, and allowed us to follow them up over 50 years later, and others who’ve answered question every two years for almost 30 years, some have given DNA and biological samples. But this method of tracking people’s experiences, their natural histories, their biology, and how well these all come together has been absolutely invaluable to research across so many fields. And what we know about life course risk and protective factors for health as we age would not be where it is today without these folks, especially the diverse range of folks involved, so we can make research more relevant to addressing health needs for everyone. So if any of them are listening, a hearty, very grateful, ‘Thank you.’”