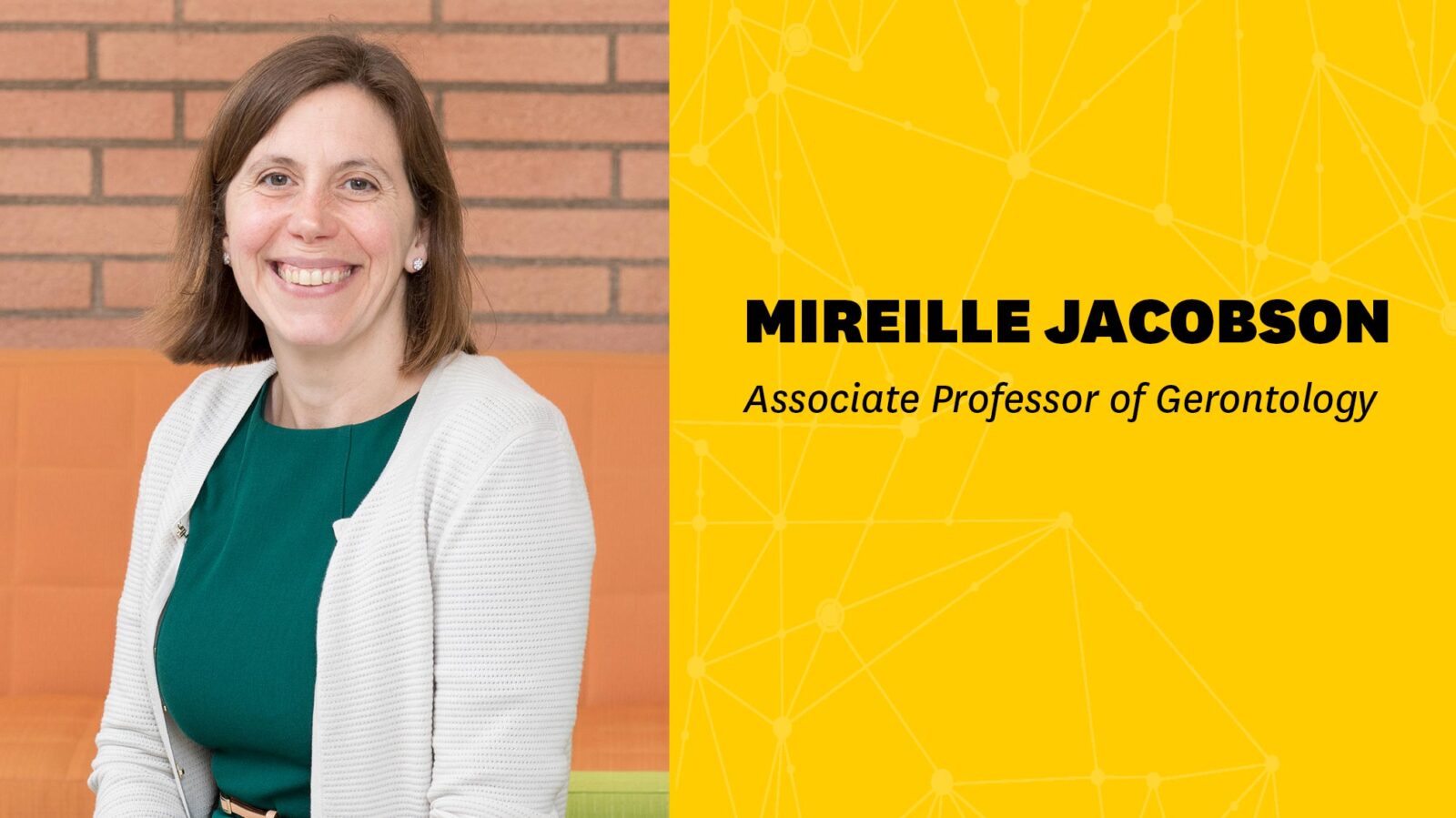 Mireille Jacobson is an associate professor in the USC Leonard Davis School and the co-director of the Aging and Cognition Initiative at the USC Schaeffer Center for Health Policy and Economics, where she’s also a senior fellow. She joins Professor George Shannon to discuss her research using economic insights to better understand decision-making around vaccines, palliative care, Alzheimer’s disease and more.

On health economics and the role it plays in healthy aging

“Health economics really is just the application of economics to health and healthcare… So whether it’s time or money or attention, we all have to kind of make what we call trade-offs. Health economics is really thinking about how to make choices in the context of healthcare and health. Economics isn’t just relevant, but I think really critical to understanding things like how to incentivize healthcare providers to coordinate care or encourage people to save for retirement.”

On a recent study (with colleagues at USC, UCLA and Contra Costa Health Services) looking at whether financial incentives could increase vaccination rates among the vaccine-hesitant

“What we did is we invited unvaccinated members of this health plan, this Medicaid plan, to participate in a survey. And some of the people who were in the survey were randomized to receive an offer of financial incentives, either $10 or $50, if they got vaccinated in the next two weeks. Some people saw public health messages several different kinds of public health messages that we used in the survey and others got access to kind of an easy vaccine scheduling link.

And I should say all of these, what we call interventions, were crossed. So some people got none of them, and some people got financial incentives and a public health message and an easy vaccine scheduling link and kind of everything in between. And then after the fact, we kind of looked at both what people said they would do. So did they say they were going to get vaccinated after they saw our public health message? And then, more importantly, did they actually go get vaccinated? And unfortunately, none of our nudges actually moved the needle here. So we just found that unlike in other contexts, like flu vaccinations, where we know that financial incentives can really increase uptake, that didn’t work in this context.

In fact, when we kind of looked at the data more finely and tried to kind of see how different groups responded, we found something actually somewhat troubling, which was that while as a whole people didn’t respond to the financial incentives, people who said that they supported Trump in the 2020 election, for example, were less likely to get vaccinated if we offered them a financial incentive. The same is true for the kind of older respondents in our survey. You know, the people 65 and over,  most of them had gotten vaccinated, but if we look at the people 40 and over, if we offered them a financial incentive, they were also less likely to get vaccinated. … This is how we interpret the data. They had very strong beliefs about COVID-19 vaccinations kind of not being a good thing, and offering money to them seemed to kind of reaffirm that for them and almost encourage them to dig in their heels further.

The reason I’m so excited about this project is there’s been so much discussion about how to move the needle on vaccinations but really very, very little data on actual vaccinations. So most of the work in this area … has been focused on what people would say they would do. So you’d say if I gave you $50, would that increase your likelihood of getting vaccinated? And we were able to both ask that question, as well as look at people’s actual vaccinations. And in fact, the funny thing is that we found that often people said they would do things and that just didn’t show up. When we looked at their actual vaccinations. So many of the public health messages, we used seemed to increase the likelihood that people said they would get vaccinated in the next, say 30 days. But then when we looked at the actual data, that wasn’t the case.”

“So palliative care is care from a team of specially trained doctors, nurses, social workers, and chaplains to focus on improving quality of life and reducing the disease burden for seriously ill individuals and their families. It can be provided alongside other treatments to people of any age facing serious ailments. The focus is really on treating pain and other distressing symptoms, addressing family needs, coordinating care, really focus on kind of the quality of life of patients and families. And there’s actually a wealth of evidence that palliative care can improve quality of life. There’s a now-famous study, for patients with advanced lung cancer, that showed that those receiving palliative care, in addition to regular treatment, not only had reduced symptoms of depression and a lower likelihood of hospital admission but also improved survival than those who received regular care. Kind of a stunning finding.

I would say sometimes you know, a payer’s savings is a health systems loss, right? So the incentives really matter. To the extent that palliative care saves money through a reduction in kind of unnecessary treatments or hospital readmissions, I think traditionally in our healthcare system, that meant a loss for healthcare providers, our system systems really changing, and hospitals increasingly for Medicare have incentives to kind of lower spending. And so maybe we’ll see more of a push towards palliative care and growth in the next decade or so, but I think really up until very recently, it was really at odds with providers incentives to widely offer palliative care.”

On her research concerning Alzheimer’s disease

“So this is work that I’m doing mostly with Julie Zissimopoulos at the Schaeffer Center. And she’s really the kind of Alzheimer’s disease kind of expert. Where I fit in is, is really thinking again about incentives that different payers face and how that kind of relates to Alzheimer’s disease. So we’ve looked at screening and Medicare, for example, and found perhaps not surprisingly after the fact that beneficiaries who are enrolled in Medicare advantage, kind of private Medicare plans, were much more likely to say they had received cognitive screening — so to identify or to kind of set people on the path to identifying Alzheimer’s disease or other dementia-related dementias — than individuals who are enrolled in traditional Medicare. And why I say that’s not that surprising at the end of the day, is that Medicare Advantage plans get paid for their enrollees based on what we call a risk-adjusted payment, so based on the severity and extent of disease facing their beneficiaries.

And so people have found that they’re actually kind of do a better job of screening in general and identifying health conditions of their members. And so this kind of carried over cognitive screenings in the work that we’ve done. We’re also looking right now at, kind of the time path or trajectory of treatment for people who are diagnosed with Alzheimer’s disease or related dementias in Medicare, both in, again, traditional Medicare and this Medicare advantage or Medicare managed care plans. And what we find is that actually, people in Medicare, in traditional Medicare, where care is very fragmented, are much less likely to be diagnosed outside of the hospital. Said differently, they’re much more likely to be diagnosed in the hospital than those in Medicare advantage and their rate of hospitalization and other service utilization remains much higher than those in Medicare advantage. On top of that, it looks like they’re also much more likely to die within a year of their diagnosis. And all of this at least seems to suggest that care really is not as well managed in traditional Medicare plans.”

On her future research goals

“I think most of what I’d like to do is to try to take what people think are kind of commonly held beliefs or their instincts about, whether it’s COVID-19 vaccinations or advanced care planning conversations, and try to test them with data. I think that’s kind of really what motivates me at the end of the day, finding data to ask what’s happening and can we improve outcomes for patients, for providers, really for everybody?”