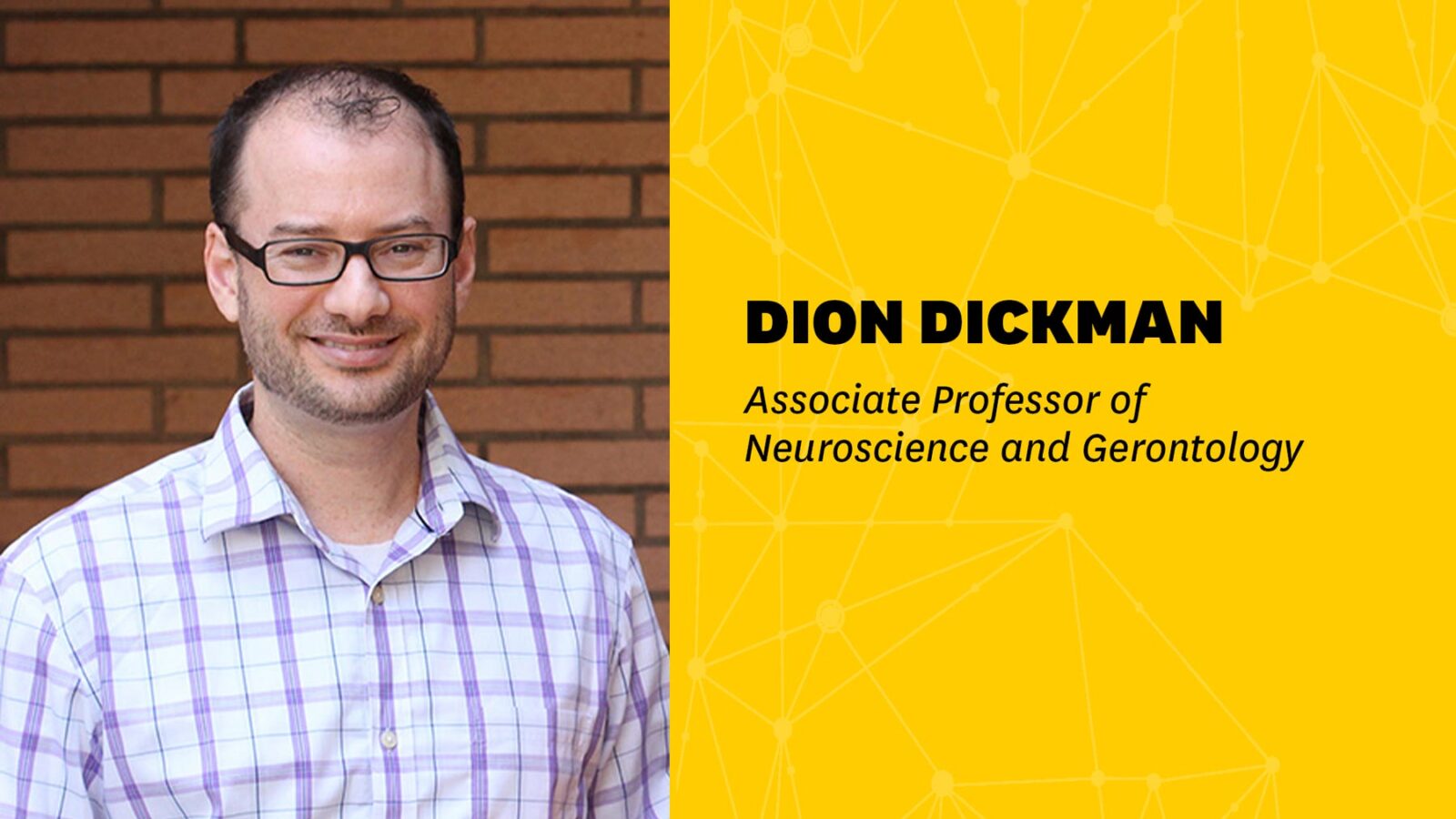 Dion Dickman, associate professor of neuroscience and gerontology, joins George Shannon to discuss how the nervous system processes and stabilizes the transfer of information in healthy brains, aging brains and after injury or disease.

“Synapses are essential, fundamental units of nervous system function and plasticity is this remarkable ability to change.  And throughout early development into maturation and even into old age, synapses just have this amazing resilience to change and adapt to different situations and injury disease, things like that. So synaptic plasticity is really the essence of what it means to grow and mature and change throughout life. Things like learning and memory all depend on changes in synaptic function and structure and it’s really a key area of research for many of us.”

“You can imagine in the incredibly complex environment of your brain, where neurons are making synapses with thousands of other neurons, that itself is a big challenge to maintain stability. Sometimes I’m kind of amazed that we don’t walk around like raving lunatics half the time and our brains remain stable. When you think of disorders of excitability or stability, things like seizures and various forms of defects in cognition ultimately come down to not being able to stabilize or maintain your neural circuit function. And this really just comes down to normal development that all of your nervous system has to stay stable and your synapses are the key substrates to maintain stability.”

On the aging brain

“.. a lot of studies are showing is that this cognitive decline that happens in aging really is ultimately due some sort of a maladaptive reduction in plasticity. And it’s kind of amazing, but, young humans, our brains are remarkably plastic and resilient, and that resiliency and plasticity seems to degrade over time and into old age… We think as old age happens .. people’s memories start to lapse, even in the absence of any disease, they’re not quite as sharp. We think this all ultimately comes down to some limitations imposed on neuroplasticity and that’s a major area of the research.

On studying diseases like schizophrenia, which cannot be seen in brain imaging

“There are no good biomarkers for neuropsychiatric diseases like schizophrenia and bipolar and things like that. So, there are basically two ways to study these kinds of diseases. One is through behavior where you try to get animals to model behaviors that mimic neuropsychiatric diseases. There’s some good work happening rodent systems. Although I find it to be honest, very difficult to know whether a mouse is showing the defect in social interaction, for example, that are characteristic of autism or schizophrenia for that matter. So the alternative instead is not to actually model the disease in drosophila or mice, but to take humans in which we can mine their genetics to find genes highly associated with the disease in humans and find out what the fundamental function of these genes are. And that’s kind of the strategy that we take.

So we found about 30 genes now that when mutated in drosophila give rise to defects in this process of homeostatic plasticity at synapses, and the vast majority of these genes have links to human diseases that give rise to neuropsychiatric diseases like autism spectrum disorder, schizophrenia, seizure disorders and, bipolar disorder as well. And so I think by understanding the fundamental functions of individual genes, we can extrapolate what might be happening in humans when those genes aren’t functioning properly.”

On the importance of sleep

“…one of the most fascinating questions in neuroscience, or really science more generally is what is the function of sleep? What is the essential function of sleep and what role does synaptic homeostasis and disease play a role in sleep behavior? So, it’s quite interesting that almost every neuropsychiatric disease has a sleep disorder associated with it. That’s already very interesting. If you look at schizophrenics, their sleep patterns tend to be very fragmented. Whereas people with depression, chronic depression seem to sleep too much, much more than is needed and many neurodegenerative diseases of old age like Parkinson’s, and Alzheimer’s one of the earliest predictors of these are sleep dysfunction at earlier stages and there’s also many studies that have shown that if you treat the sleep dysfunction, you can improve the symptoms of neuropsychiatric disorders. A schizophrenic, for example, might get if you improve their sleep, their symptoms, cognitive symptoms seem to improve children with autism spectrum disorder have, big defects in sleep behavior during development. And it’s thought that if you treat the sleep defect, you can improve the phenotypes of autism. So a lot of research seems to be showing that synaptic homeostasis and plasticity and sleep behavior and disease all share really important and synergistic links between them. And I think that really is the major challenge for the future is to understand what happens to synapses during sleep. What happens to synapses during various neuropsychiatric diseases and can this intimate relationship between sleep and, and synaptic plasticity be targeted as a way to improve and treat psychiatric and neurodegenerative diseases.”

On bringing a multidisciplinary approach to research

This is a big advantage, I think of especially working at USC, in, you know, straddling different schools like Dornsife and gerontology and really being able to throw everything we can in our toolkit at a question or a problem. So, our lab is a drosophila genetics lab. We do neurogenetics. But we do electrophysiology to understand how synapses function we do basic imaging to see synaptic structures and how they work. But we also do a lot of super resolution imaging. Now we’ve got a super resolution microscope that we’ve recently purchased that allows us to look at the nano architecture of synapses and how they might change during defects and plasticity and disease. And finally, we’re doing things like calcium and voltage imaging to really see the dynamics of how, you know, visualize plasticity happening in real time or dysfunction happening as they go on. So I think having a large toolkit to throw everything we can at a question really lets you see the same problem from many different perspectives.

On the value of basic scientific research

“Science is for me a curiosity driven process. It’s great that there are ramifications to disease and health and humans, but what initially inspired me was just to understand how does nature work and how does the nervous system work. And so I want to just say supporting basic research, basic science, even if it doesn’t have any direct implications on disease right away, I think is really important as part of scholarship, as part of what we at the mission of our university, but also just as our world. I think to study basic processes and just understand how nature works and then the applications of them with all evolve. You know CRISPR CAS9, as many of you have probably heard about, all came from basic research and now it is going to revolutionize health and disease.”