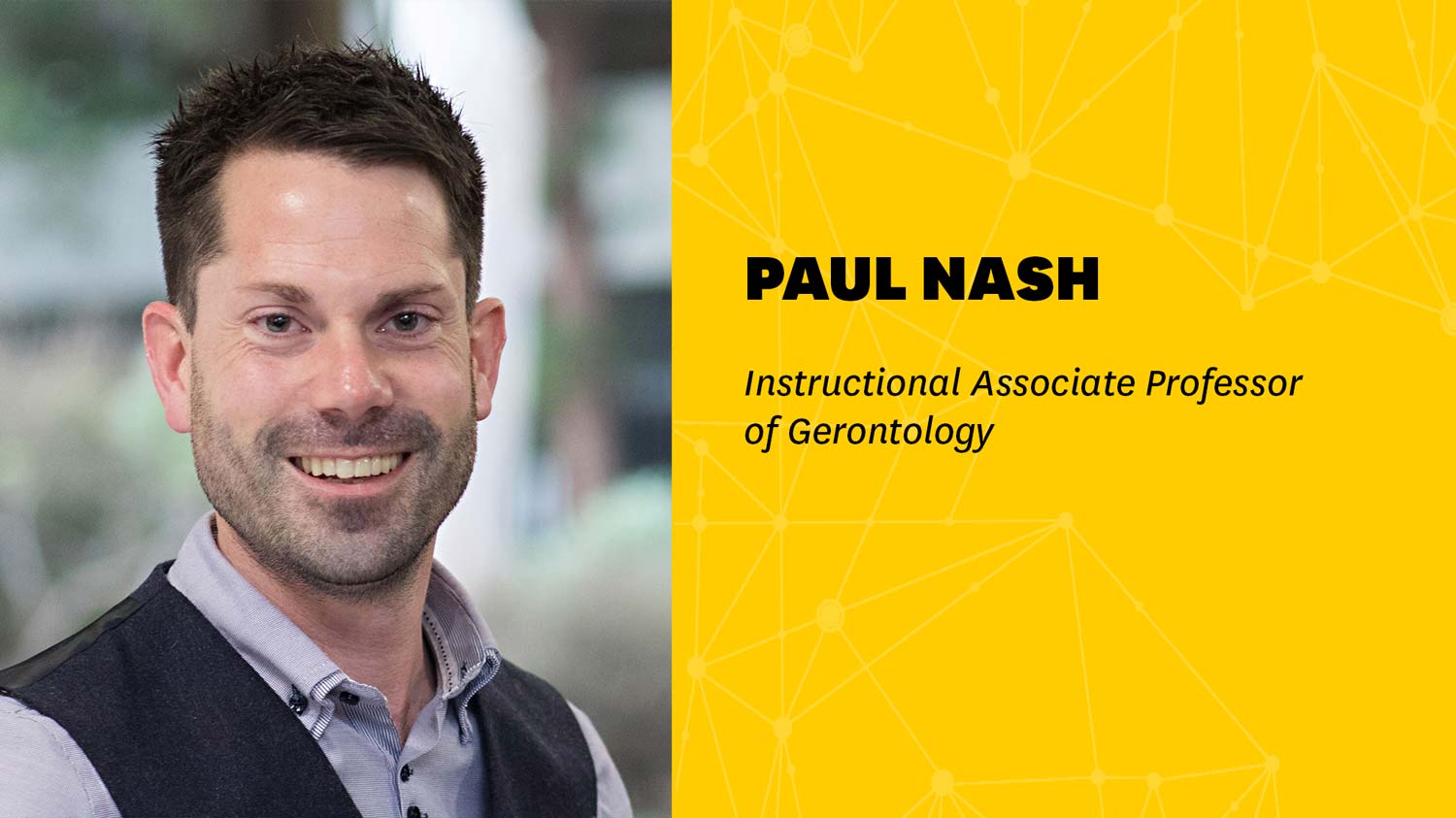 Instructional Associate Professor of Gerontology Paul Nash joins Professor George Shannon for a conversation on the impacts of ageism, intersectionality and LGBTQ+ issues in aging, and the importance of talking about sexual health with older adults.

On stereotypes and the impacts of ageism

Well, there’s some huge implications when it comes to ageism. So when we look on an individual level, we know that those people who have internalized ageism, so when they’ve acquired ageist attitudes across the life course, and then they reach older age themselves and they start to internalize those negative perceptions. We know that people that do that tend to walk slower, they tend to be more unstable on their feet, more likely to fall. They also have reduced cognitive functioning. So we actually start to see these stereotypes as we call it embodied. So we call it the stereotype embodiment theory, and we know that older adults have this more negative opinion of aging and being older themselves also have an average life expectancy that is about seven and a half years, less than those people that have a positive attitude about aging.

When we look at society, we know that older adults make a huge contribution to society. We talk about billions of dollars a year in things like informal caregiving, even in terms of paid work, but also within the volunteer sector as well. So older adults make a continued service to society and to the economy, but it’s often something that is not really discussed this often. So it’s not really met. And when we start to prejudice against old people, we actually discriminate against their engagement in society. And as such what we’re doing is actually making things an awful lot worse for ourselves. So what we need to do is start to actively embrace older adults and their diversity and understand accurate perceptions of aging rather than these stereotype myths that are widely held.

Ageism is essentially prejudice against your future selves. So if we set up an ageist society, now when we read later life for ourselves, then we’re going to be living and growing old in that age of society. So we need to start to challenge that younger people need to appreciate that actually having no wrinkles having gray hair or whatever, having wrinkles and gray hair is not a bad thing. Being older is not a bad thing. When we start to see all these anti-aging serums, well, that’s kind of a fallacy. It’s not going to stop you from aging. Every moment that we’re alive, we are aging. Therefore, really the alternative to aging is death. And I don’t think many people would like to wish that upon themselves either.

When it comes to the wider social problems and the stigmas and things that I think we need to try and do is we need to be very much aware of our own language. And language, as you know, is incredibly powerful. So for example, we might see ageist stereotypes in greeting cards, and we will have a bit of a giggle about that, but, well, that reinforces the stereotypes. That adds to the issues that older people think that well, okay, I’m 60, I’m 70 I’m 80 as well, I must have cognitive impairment. Well, indeed, what we need to do is start to challenge these stereotypes. We have this assumption, or we paint this mental image in our head that all older people are going to be frail. All older people are going to have cognitive impairment. That’s just not true. The majority of older adults, even the age of 80 are not going to be living with cognitive impairment. It’s a disease state. Yes. We understand that people who, as they age are more likely to develop dementia, but the majority still don’t.

On intersectionality and LGBT issues in aging

We know that the majority of older adults within the LGBT community are likely to be single. They’re also less likely to have a biological family, so children of their own. And they’re also more likely to be estranged from their own family, which has led really to the development of what we call family of choice, which is really where people surround themselves by friends and friends basically take that role of family within your own life. But that can be kind of challenging unless we have intergenerational family or intergenerational families of choice, because it may, be for example, that a group of people at the same age all start to require support and help at the same sort of times.

We have to be very, very conscious of this. And then as I mentioned before, with that intersectionality, when we look at how racism and sexism and homophobia has developed across the last 50 years, we can start to understand then why, for example, gay women of color, and especially trans women of color are subject to the most forms of discrimination, which leads to problems in terms of accessing services, because they don’t have faith in healthcare services, in support services, in any formal structure. So we have to make sure that there are targets and health messages. We need to make sure that we are removing some of these intersectional barriers so we can try and aim for a more equitable society.

One of the problems that we have within the LGBT community is that there are very few quote-unquote safe spaces. And these often revert around bars around nightclubs, around places, for example, that you might meet with loud music and as an older adult, that might not necessarily be your ideal situation, especially if you’re living with cognitive impairment, if you’re living with a visual impairment or indeed issues with hearing as well. So we find that older adults often feel slightly isolated from these particular groups, which leads to larger issues with their social network, having reduced social networks and indeed self-isolate. And we start seeing then the problems around social isolation and loneliness that you mentioned earlier, George. And these are huge issues, not just within the LGBT community, but within the older adult population as well. But before we go down that rabbit hole, it is worth mentioning that older adults are not the most lonely in society.  Actually, that is something that we can pass off to the younger generation, which arguably is partly down to that social comparison with social media.

On the importance of talking about sex and older adults

One of the problems that we’ve got and this really pervades through research as well, is we have this wide standing assumption that older adults don’t have sex. So as soon as you reach 50 ok and say, you’re done, you never have sex again. We know this to be untrue, but research and mostly policy also stopped collecting data about older adults and their sexual health and their sexual behavior as well. So there’s a lot of data that we just don’t have on this population. So when it comes to sex and sexual health, what we need to do is make sure one, we’re engaged in the older adult population and saying, well, we know you’re having sex, but let’s make sure we can do it in a safe way.

We also need to make sure that sexual health screening is available for older adults because we have targeted interventions for youth groups,  for hard-to-reach communities, but we don’t have sexual health screening that goes around residential care, for example. And there’s no reason why we build that. We also have to be very, very aware that older adults have different relationship styles. So gone are the days where every older adult is in the same relationship that they were in when they were 20 years of age. Indeed,  now we’re seeing increased divorce rates. We’re seeing open relationships, polyamorous relationships, the same as we’re seeing across other age groups as well. So we have to be very aware that for example, condoms, aren’t just there to prevent pregnancy, but they’re also there for sexual health. And we can take that across to, for example, HIV, where we see now that over 50%, nearly 60% of all those people living with HIV are older adults. And within this population, those are people over the age of 50. And that’s been a real challenge, both in terms of healthcare providers also in terms of policy.

So really what we need to do is open our minds and address some of these ageist assumptions that we have around older adults, and actually start to work with older adults as well, rather than making these assumptions about this homogenous group, which is exactly the opposite. It’s the most heterogeneous group that you’re going to get and actually work with them to understand some of these intricacies and understand some of these challenges that have been faced. So again, what we can do is try to make sure that these health messages are targeted and available for these specific groups.

If we make these assumptions, the old people don’t have sex well, we’re automatically cutting them off from research or automatically cutting them off from health services. So really, I think one of the key lines is something that we used very, very widely in the UK. When working with older adults, we should be saying nothing about us without us. We should have that participating in inclusion work with older adults. Don’t make assumptions around them and what aging actually entails when actually we’ve got these experts in the field, as it were, that are largely ignored from social policy and from research.