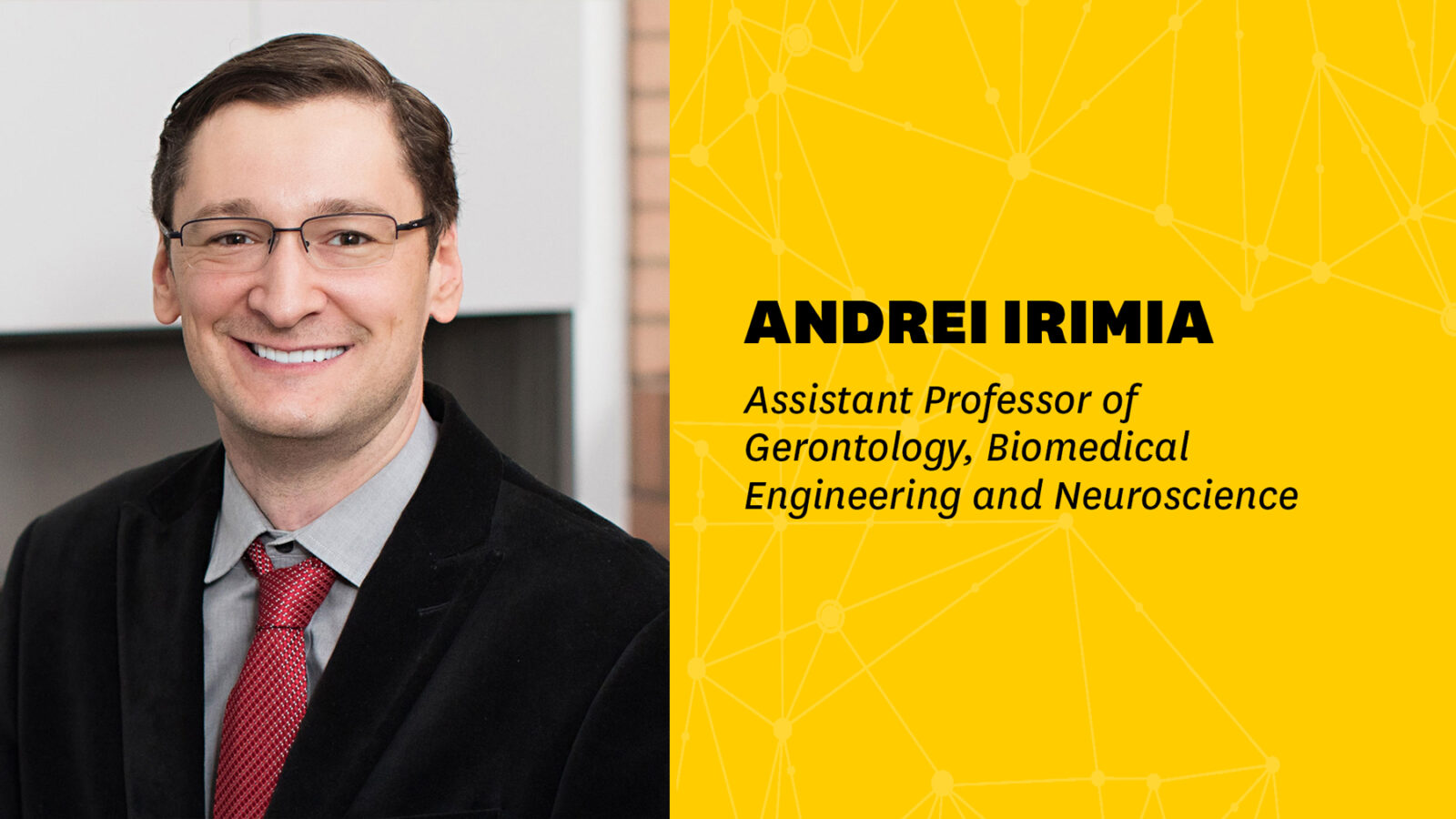 Assistant Professor of Gerontology Andrei Irimia joins Professor George Shannon to discuss brain imaging and brain health, including his work to determine who is most at risk for Alzheimer’s disease after suffering a concussion or traumatic brain injury.

Quotes from the episode

Usually, injuries sustained early in life are the least likely to cause issues down the road during the aging process. And in fact, the brain is most robust to brain injuries in the first and second decades of life and injuries sustained during that period have typically the best outcomes and the best rates of recovery. And as we age, it becomes more and more difficult for the brain to recover after a traumatic brain injury. So, older adults, especially those over the age of 65, are at the highest risk for a poor outcome after a concussion or a more severe traumatic brain injury.

After the age 40 or 45,  there is a little bit of an increase in the risk for degenerative disease, including Alzheimer’s disease. And that risk really increases after age 65. We have a preliminary study where we found that the biological age of the brain increases dramatically after a traumatic brain injury sustained after the age of 65, whereas for concussions sustained before that time, the biological age of the brain does not increase substantially at all.

On identifying patients at risk for cognitive impairment after brain injury

We’ve done a number of studies that have been funded by the National Institutes of Health and the Department of Defense on how we might be able to predict the risk for cognitive decline after traumatic brain injury. And we have studied cohorts of patients with Alzheimer’s disease and compared them to healthy control adults who are age and sex match, who did not have a history of neurological disorders or have mental health disease. And, we found that it is actually possible using some tools that involve machine learning to predict the rate of cognitive decline based on acute imaging findings shortly after the injury. And we were able using these techniques to determine that the fact that we can actually identify the patients who are most likely to, uh, be at the highest risk for accelerated cognitive impairment six months or even one year or further after injury based on imaging scans. So this value, I believe is very valuable because it can identify patients who might benefit from additional monitoring and supervision by their clinicians and who might benefit from tailored therapies and from lifestyle changes that might decelerate the rate of cognitive impairment and might decrease the risk for Alzheimer’s disease or other neurodegenerative diseases.

On studying the brain and heart health of the Tsimane

This is a very interesting and very important project that’s been ongoing for essentially 20 years now. And I’m very fortunate to be part of a very large and talented group of interdisciplinary researchers who study the Tsimane people of the lowland Amazon basin in Bolivia. The Tsimane are a group of forager horticulturalists who live a very traditional lifestyle that does not rely on electricity or any of the amenities that we are used to in the industrialized world. They live in villages located in the forest of lowland areas in Bolivia very far from, uh, electricity from paved roads from modern medicine.

And the reason they are very interesting to study is because they have profiles, especially pertaining to their cardiovascular health, to their neurological health and to their inflammatory profile that is very similar to that of our ancestors, many thousands of years ago. And here’s a lot of interest in whether, Alzheimer’s disease, whether cardiovascular disease and, and many other disorders are perhaps, at least in part, the result of a modern industrialized environment, where we have a large amount of processed foods being used, especially here in the United States where we have air pollution, water pollution where we have a lifestyle involving sedentarianism, which is, uh, very common in the United States and elsewhere in industrial life countries. And by contrast that Tsimane live a very active lifestyle and they live off the land. So, the men go hunting in the forest with bow and arrow.

Their cooking does not involve trans fats or a lot of the unhealthy fats that are included in many of the processed foods here in the United States. So it’s a very interesting natural experiment so to say, because their example allows us to study how Alzheimer’s disease and cardiovascular disease might be in fact, predicated on some of the environmental factors that we have here in the United States and in other industrialized countries. And, my part of this collaboration is focused again, on the brain. And we had a study recently in the Journal of Gerontology where we showed that the brain of the Tsimane people after adjusting for head size, have a rate of volume decrease, which is considerably slower than in populations from the United States and Europe. And we found this to be a significant result because the rate of brain atrophy is very highly correlated with the rate of cognitive decline and with the rate of Alzheimer’s disease risk.

And, in addition to that, the Tsimane have a very low prevalence of cardiovascular disease. And in fact, a couple of years ago, our group published a paper in the Lancet showing that the Tsimane are the population at the lowest risk for cardiovascular disease out of all populations that have been studied by science. So this is a very unique group who seemed to have excellent cardiovascular health. And now with our study on the brain, we have shown that they also have a very slow rate of brain atrophy, which raises the question as to whether our lifestyle here in the United States and in other countries that are industrialized, where we have unhealthy diets and a sedentary lifestyle might actually increase the risk of Alzheimer’s and risk of cardiovascular disease to extent that are highly significant.